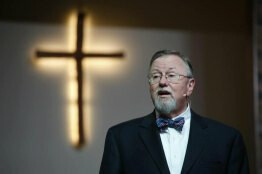 On October 22, 2006 Grace Baptist Church was born and Bill Haynes was the founding senior pastor. He continues in the role of Senior Pastor today. On New Years Eve, 1971, he married Rhetta Landers and they have three grown children. Carol-Beth who lives in Orlando, Anna who lives in New York City and Will and Samantha who live in Nashville. Also the very proud grandfather to Adeline born August 2017.